A Tale of Dead Batteries

Buying a used coach comes with the unique experience of constant discovery of new things hidden away. These things are someitmes good, sometimes bad. Our 1998 Winnebago Adventurer 32 came with a very factory supplied looking 200 watt-ish inverter that powers the tv, vcr, etc. One of our first modifications was to install one of our two sets of Bose Companion 2 speaker and subwoofer setups. Last year on a lengthy trip to Florida, we wre suprised when halfway through the trip the inverter shut off. We didn’t think much of it and started the generator to charge the batteries (because we did see that the converter did work).

Fast forward to today and several tests later we came to the conclusion that our house batteries were pretty well done for. They could power our tube TV drawing 200 watts for mere minutes before shutting down so we knew it was time for replacement. After doing a lot of research we came to the conclusion that the stock Magnetek converter supplied with our motorhome was doing it’s very best to fry these batteries so we nabbed a fantastic deal on an Intellipower 45amp converter/charger on ebay. This converter has 3 stage charging and has very good maintenance cycles to ensure the batteries don’t get overcharged and boil away. Since then we’ve used the generator on every trip and have not had an issue but I noticed once again that after a night of running fan the battery wasn’t charging with the engine running. When the “aux start” button was pressed, a thump occurred behind the dash but the voltage of the bank wasn’t changing as you’d expect when you connect the chassis battery to the coach battery.

I suppose a small backstory would be nice for the non-technically inclined. Basically a motorhome has 3 distinct electrical systems. One 120 volt system with standard household outlets, one 12volt “coach” system which in our case has 2 deep cycle batteries connected in parallel and is also connected to our inverter/charger. The final system is a 12volt system that powers chassis electronics like fuel injection and the engine starter. This has it’s own battery but that battery is designed more to give off a lot of power for a short amount of time (to satisfy the demands of an engine starter).

When it comes to how these systems are interconnected, the answer is extremely fuzzy, even amongst similar model numbers. Copious amounts of reading schematics, studying forum posts and other powers of deduction lead me to realize that there is a solenoid that connects my chassis and house battery banks together under certain conditions and that that solenoid isn’t working. A forum post explained it that on Winnebago’s like mine (indeed since way back in the 70’s), the run position of the ignition key (as well as the dash “aux start” switch) sends power to this bank connecting the batteries. The purpose of this is so that when you are camped you will not drain your engine start battery but while your engine is running the alternator is able to charge your house batteries. This alternator charging of our house batteries I now confirmed is supposed to happen but isn’t.

Here is the culrpit. It is quite a common part known by many names and brands, namely a Camdec 97226. I purchased a replacement part made by Tekonsha from Amazon which had a very ominous review attached. Apparently this particular reviewer’s solenoid was not manufactured very well and the crimped cap popped off. The internal solenoid bridged to ground and started a fire for him. I decided to hedge against this by wrapping the assembly in electrical tape hoping that it is strong enough to hold back the spring forces of the solenoid. Time will tell I suppose. 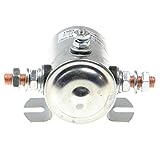 With some spousal assistance I located the chamber which housed this solenoid and the solenoid itself by asking her to repeatedly turn the ignition from run to off and listening and feeling for the clunk.

In my coach it is behind a box labelled “Battery mode solenoid and relays”. Fitting enough. This box housed the solenoid to completely disconnect the coach batteries from the house 12v system (for storage or maybe something else), and this unit works fine. The other solenoid we were looking for was well buried and took a lot of effort to remove. It’s important to note that you are working in a box that has very large power lines in close proximity with very large grounds. If you were to play inside this box without disconnecting ALL batteries, AND household AC so that your converter isn’t powered, fantastic fire, explosion and personal injury could result. Take proper safety precautions! After wrestling the old unit out and installing the new one it’s fairly easy to see the source of the failure. Now bearing in mind, a direct connect solenoid is probably the WORST way to accomplish charging your coach batteries from the alternator, the implementation in my particular motorhome is an abysmal failure. Leaving a voltmeter on my coach batteries and cranking the engine you can see the coach batteries dip down to 10v. Yes folks, the geniuses connected the solenoid to a line that is hot in both the run AND start positions. Attempting to crank the motorhome while this solenoid is engaged each and every time you start the motorhome will kill it in short order. There is also some question as to what happens when your generator is running, converter is charging and directly connected to your chassis battery as well as your alternator. Can you back feed an alternator? Is that bad for it? Who knows!