We had problems with our fuel pump. At least that’s the operating theory. We didn’t do a whole lot of diagnosis for reasons I will explain. It all started when we crested a hill after a long climb on a 98 degree F day. The motorhome died completely. We coasted down the mountain with a dead engine and came to a stop in the chain removal lane. The motorhome would start but it would sputter and die in a few seconds and the symptoms just screamed fuel to me. We waited an hour and still no dice so we went about getting help. Before we left I had my darling crank it and I could hear the pump making angry noises so that made me all the more sure I pinpointed the issue. We broke down in an area with no cell phone service so we had to disconnect and a couple hours later when we got back the motorhome started and ran so we drove it to the nearest campground to lick our wounds and figure out what to do.

The normal google research really pointed to the fuel pump being the culprit. I had already replaced the fuel filter before this trip. The motorhome has been displaying evidence of fuel starvation. It’s been pinging under load and it has been stalling right on a cold start suggesting the fuel pump wasn’t supplying nearly enough pressure. Recently the check engine light came on for oxygen sensor lean condition. This was a huge warning flag that I somehow ignored thinking the O2 sensor itself was bad.

When the park we were staying at welcomed us to change our fuel pump in our site we decided we’d be idiots not to so we decided to forgo additional troubleshooting and blame the pump.

Part of the reason we were quick to blame the pump without much fanfare and diagnostic work was because the pump is a known problem. Our motorhome has a build date of 3⁄96 and before 6⁄96 Ford used a gear driven pump. After 6⁄96 they replaced this pump with a completely different turbine pump. Now you can order the updated pump from RockAuto.com (currently $380) and you’ll be tempted to order the $82 airtex pump or some other brand but this is a bad bad idea. First of all, the job kind of sucks and if you pay someone else to do you’ll be paying a lot of money because the job sucks. Secondly all of the other pumps have a bad reputation just like the pump you’re replacing. So using anything but the updated ford pump is a waste of money.

Some people blame the fuel sock. There is a filter sock that the pump draws up fuel through and if you have some rust in the tank break away it can clog the sock. This wasnt the case for us. The sock was discolored but not even close to clogged.

The way we did the job was to pick a site that was built up a bit as you can see in the picture. You put a small floor jack under the rear of the tank, loosen the front center tank bolt, remove the front and rear straps and then remove the rear tank bolt. Then you have to remove the filler and vent tube. Removing the filter and vent tube completely sucks as there is no easy way to access the clamps. Just do your best and be patient and eventually you’ll get a ratchet on it. Once you get off the filler tubes you can drop the tank from the rear and then there is enough room to access the fuel pump.

You CANNOT do this on flat ground! Not unless you jack up the rear of the motorhome. Basically even in my case the old pump came out really easily but the new pump is longer and has a fatter diameter of the bottom part so it wouldn’t go in. I had to jack up the rear of the motorhome, remove the floor jack and dig out where the tank hit the ground in order to gain enough clearance. The new pump also has a spring loaded mechanism to make it stick to the bottom of the tank. Zip tie this in order to shorten the assembly as much as possible and then cut the zip tie after it’s installed.

The fuel lines are quick disconnect and you need the proper tool. They are the same as A/C quick disconnect tools and I had some on hand to do the fuel filter. You need different sizes so get the kit. The fuel pump has 3 lines connected, pump, return and generator.

Now the old style pump is supposed to have 3 wires and the new style pump is supposed to have 4 wires. In our case we had an old style pump with 4 wires! Imagine my surprise. This is lucky because RockAuto didn’t include the jumper harness they are supposed to. You are supposed to cut the end off of your 3 wire connector, splice in the 4 wire connector and solder and heat shrink tube the connection. The mind doesn’t have to work too hard to imagine what fun soldering that close to the open fill tube could be. You could get the job done by leaving the connections hang down beside the tank and then put it back in place. Then you can solder with no fumes escaping and hopefully avoid any explosions (technically soldering with an iron shouldn’t cause an explosion but it seems risky to me). So even though Rockauto didn’t include this jumper harness for us (make sure to call and ask or order it separately as it is SUPPOSED to be thrown in) it all worked out and the new pump plugged right in.

We started the motorhome and it ran without spewing fuel everywhere so I buttoned everything up but we have yet to take a long test drive. Fingers are crossed. I’m just glad I found an old style pump in there. I’d hate to do all this work and find out it was a wild goose chase.

And by the way, here is a link to what I believe is the right pump on Amazon. We bought it from Rockauto. 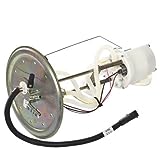